I thought I’d post this, just in case you didn’t know where to get info on our neighborhood.    I love Wikipedia….all credit to them.

Olde Towne East is a neighborhood located in the historical Near East Side of Columbus, Ohio and is one of Columbus’ oldest neighborhoods. The area has over 1,000 homes, some as old as the 1830s, and more than 50 architectural styles as a result of its history. These homes were built by many of the famous individuals of Columbus including industrialists, lawyers, judges, teachers, architects, mayors, governors, and legislators, many of whom shaped the city.

The site had long been a way point between the Scioto and Muskingum Rivers. By the fifth century, the area had a mound-building culture whose influence lasted into the twentieth century. The only remaining testament to this past is the mound currently located at the corner of Bryden road and Champion Avenue. In later years COSI would discover sites showing the neighborhood to have been occupied for at least ten thousand years.[1]

The Town of Columbus was laid out in 1812 by Joel Wright, with today’s Olde Towne East being directly east of it on a high ridge. A massive population boom followed the Civil War leading to growth along Broad, Long and Main streets. The major transportation was foot, horse, and horse-drawn buggy until the rise of the street car. The area evolved from farmhouses to a subdivision in the 1870s with a few houses remaining, but the majority being gutted in favor of new store frontage. This allowed people to leave the city and live in streetcar suburbs, causing further growth along Main, Long and Broad streets, and Mount Vernon Avenue.[1] From this period comes the unique architectural style of Olde Towne East, there was a social mixing of rich and poor because residents were in close proximity to each other. It was common for wealthy individuals to live up the street from those of middle to lower class and in some instances bosses lived near their own employees.[2]

After World War I the area was diverse and encouraged interaction among social classes. At this time, the whole Near East had begun to develop identities within its neighborhoods. Following World War IIalong with the emerging commonality of the car, and the rise of suburbia, the whole Near East changed. By the 50’s much of the housing abandoned by wealthy owners began to deteriorate, while houses that were much older and bigger were divided into apartments and rooming houses. The construction of the interstates and the Model Cities Program cleared sections of the Near East reducing housing stock, forcing residents to move, some believe that this results in the relative isolation of the Near East.[3] Following the trend and emergence of the 60’s American Preservation movement, and further spurred by the National Historic Preservation Act of 1966 which established preservation legislative, the neighborhood association of the 1970s[2] emerged to lead the recovery of Olde Towne East and the rest of the Near East community.[3]

Today, Olde Towne East is going through a major upswing. Homes are being renovated and sold at high prices. Upper class families are making a return to the community in large numbers. Unfortunately, this has caused a classic example of gentrification. In fact, Olde Towne East was featured in the documentary called Flag Wars. Today, one can drive down the streets and watch gentrification occur in person. Next to a beautifully renovated mansion there stands an abandoned one for sale to an investor. Olde Towne East is going through a major renovation due to a string of new businesses emerging. A series of bars, eateries and varied other business have opened up between Bryden Road and Broad Street in the Parsons Avenue business corridor. Main Street has also seen a boom in public and private development. The new commercial activity, which is concentrated around 18th and Oak streets, attracts residents and tourists breathing new life to what had been “a collection of houses”.[4]

The north and east boundaries of the area known in modern times as Olde Towne East has long been disputed. According to the Olde Towne East Neighborhood Association (OTENA), it is bounded to the south by Interstate 70 by and to the west by Interstate 71. According to OTENA and the Columbus Dispatch (unsourced) the boundaries of the neighborhood are East Long Street to the north, Interstate 70 to the south, Wilson Avenue, the alley east of Latta Avenue, Miller Avenue and the alley east of Kendall Place to the east, and Interstate 71 to the west. This interpretation means that there is significant overlap with the Bronzeville, in the present day often known as King-Lincoln Bronzeville neighborhood (part of which is also known as “NOBO” or North of Broad) which identifies its southern boundary as East Broad Street, which is two blocks south of East Long Street. According to Google Maps Olde Towne East is bounded by Broad Street to the north, Interstate 70 to the south, South Champion Avenue and Wilson Avenue to the east and Interstate 71 to the west.

On September 20, 1887, The Presbytery officially established the Broad Street Presbyterian Church, and selected Rev. Marsten as the first pastor. Many criticized the move saying it was too far away from downtown, and was later considered “a smart strategic move” because of the growing experienced in the near east side.[5] 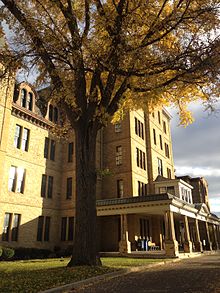 The Columbus Public Health Building offers a variety of health related services ranging from alcohol and drug abuse clinics to tuberculosis control.[6] They also collect and provide medical data via publications and research from the epidemiology department.[7]

View of the top of Columbus public health building, somehow got a lens flare in there

English Park is home to the Kwanzaa Playground was developed in 1995 as a joint effort between the community and the City of Columbus. Seven local artists and sculptors contributed the design and construction. The park has a human-like shape representing mankind’s first ancestor. The park focuses on positive African-American imagery to embrace the concept that “It takes a whole village to raise a child.” [8]

In 1890s, it opens as a blacksmith shop. However, deal to the emerging popularity of the car, it quickly transformed itself. Within ten years it started to sell tires and continues to do so, making it the oldest tire dealership in the United States.[9]

Jones Mansion, Central Assurance Insurance, Jong Mea Restaurant and Orebaugh House, all represent “over half a century of distinct architectural styles”. The Jones House sits on a stone foundation, with a slate roof, gables set above a circular tower flanked by tall, decorated chimneys. The Central Assurance Insurance Company is a 1940s Art Deco style building. Next to it is the Tudor style half-timbered 1920s mixed use Jong Mea Restaurant. The downstairs portion was the family-run restaurant and the upstairs was the family’s residence. Finally, the Orebaugh House, an 1880s Italianatehome with a L-shaped porch and frieze style windows.[10]

Olde Towne East is and has been home many people of interest, most of whom contributed to or experienced some part of American culture.[2]

There is no distinct architectural style in Olde Towne East, the uniqueness results from the diversity as a result of close proximity of all social classes early in the area. Though housing interiors were predominantly utilitarian, a large front porch that is a common aesthetic to the community. It is believed that the big porches “shaped the neighborhood” and the way people lived their lives, because residents went to hangout there while escaping the conditions of pre-temperature and humidity controlled housing, but it also served an excuse to interact with their neighbors.

Historic preservation and the neighborhood association[edit]

Since Columbus industrialized, a new middle class was formed by a group of white collar workers. However, the emergence of the streetcar, soon moved them away from the industrial Olde Towne East, and following this the rise of the car moved wealthier residents out too. Shortly afterward a large population of African-Americans moved in and later had the interstates further divided them from Columbus geographically and while effecting Olde Towne East’s economy.[2]

Following the above problems, and many other nationwide issues that emerged with time, the Neighborhood revival movement began to motivate residents into repairing houses and beautification projects.[13] Olde Towne East is predominantly African American, with a sizable gay and lesbian population. Most residents have at least a bachelor’s degree, and are earning $13,000 to $35,000 annually.[14]

Olde Towne East is involved in the Neighborhood Commercial Revitalization Program(NCR) which is a Business improvement program for the district for Columbus and other cities in the Northeastern United States. The NCR matches grants and loans, while providing: technical assistance, capital improvements and planning services for business organization. Staff in the NCR even offer help to individual businesses for architectural designs and exterior rehabilitation efforts of their property. This is done primarily through the NCR’s Investment Fund, the Commercial Improvement Loan Fund, Facade Renovation Fund, and the Storefront Renovation Grant Fund.[15]

Hot Times Festival A music festival celebrated from the 10th of September to the 12th, known for a diverse array of entertainers.[16]

Blackburn Recreation Center The main features are its, art room which has a pottery kiln, the swimming pool, a dance room, meeting rooms, a volleyball court, and amenities to maintain a boxing program. There is also a basketball court but some argue against the loss of basketball privileges that are in place for adults.[17]

Many believe that Olde Towne East is due for gentrification, just as the Short North had been[19] this issue is addressed in the movie Flag Wars which is itself controversial for differences of opinion and suspected biases.[2]

In March 2014, Brian Higgs(Columbus Developer) won the right to add a modern building to Olde Towne East, for the sake of diversity. Some residents believe that the “project is not compatible with the existing character of the neighborhood” being a historic community. The plan’s supporters claimed the project would clean the 1-acre brownfield former site of a carpet factory which “laced [the ground] with arsenic and other chemicals”.[20]

Sorry, the comment form is closed at this time.